Omni Holding AG went bankrupt in 1991 The Union Bank of Switzerland (UBS) in particular, as my teaching institution at the time, was marked by this scandal in the aftermath of the Asian crisis (1997-1998). The SBG General Manager and later Honorary Chairman Robert Holzach wisely refused to grant loans to the financier Werner K. Rey. As a student, I then followed the trial of Werner K. Rey before the Economic Criminal Court. The rise and fall of Omni Holding AG thus occupied my career in many respects.

Werner K. Rey became known to the general public in 1976 when he made a profit of around CHF 30 million by buying and then selling C.F. Bally AG to Oerlikon-Bührle Holding AG. A unique move for the time. Rey then acquired the temporary employment agency Adia interim (Adecco) in 1986, floated the inspection company Inspectorate on the stock exchange, acquired the Jean Frey media group, Metallwerke Selve AG in Thun and a minority stake in the industrial company Sulzer. At the time, Rey was considered a model financier who had made it far with a banking apprenticeship and no studies. Rey bundled the various holdings under the umbrella of Omni Holding AG, which was entered in the Commercial Register of the Canton of Bern (CH-035.3.011.958-6) on 3 November 1993. The purpose of the company was the acquisition and permanent management of participations in other companies (sector: operation of other financial institutions). The reference to “other” refers to all financial market intermediaries that are not subject to prudential supervision. In the meantime, of these financial transactions that do not require a licence, only the financial commission business seems to exist. This is understood to mean the acquisition and sale of financial instruments (e.g. shares or bonds) in one’s own name for the account of a third party. For Rey, this financial commission business was of great importance for his entire professional activity. 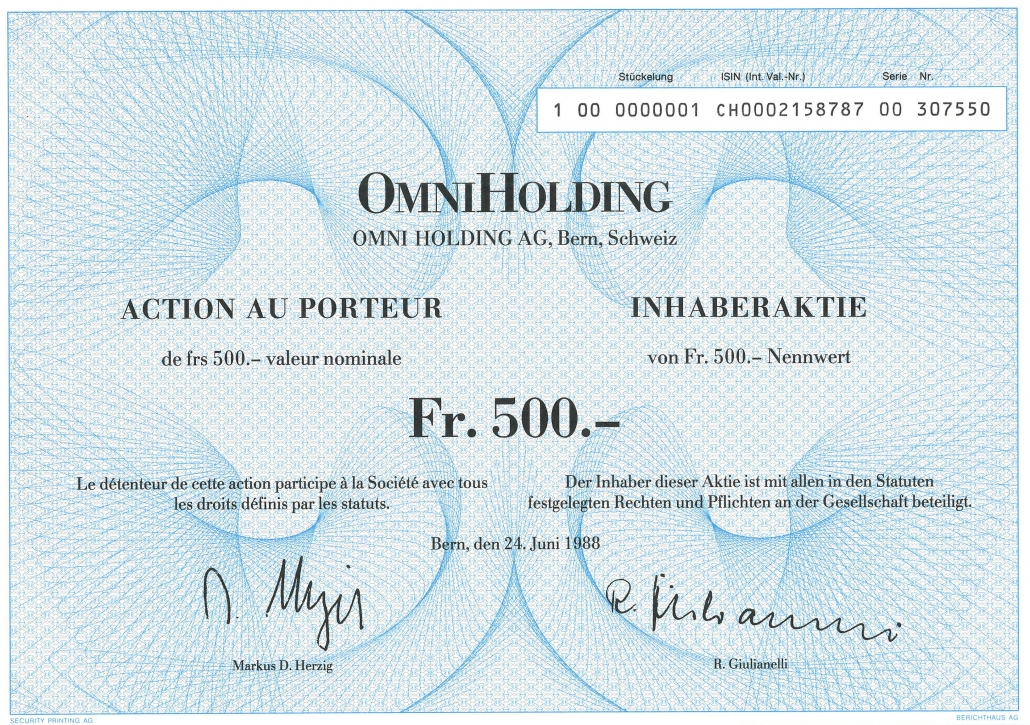 From 1990 onwards, there were increasingly threatening signs of serious economic difficulties. After proceedings were opened for fraud, forgery of documents and fraudulent bankruptcy, Rey fled to the Bahamas, where he could not be arrested until six years later. Subsequently, the Bernese investigating magistrates, together with the competent federal authority, obtained Rey’s extradition to Switzerland. In 1999, he was sentenced to four years in prison for fraudulent bankruptcy. Today Werner K Rey lives in London without a criminal record.

In the commercial register of the canton of Bern, however, Omni Holding AG was only deleted from the estate liquidation on 2 October 2013 and a dividend of just 0.41 percent was paid to the creditors.

Pictured is the bearer share of Omni Holding AG with a par value of CHF 500. Three dividend coupons could be paid out. The ISIN of the share was CH0002158787.