This text will appear in amended and supplemented form as part of a larger publication and will be published here as a separate edition.

The structure and relationship in the working group is differentiated by ranks and roles. Collaboration is made easier if the basic principles of rank dynamics developed by Raoul Schindler are known. [1]

On the one hand, the alpha position represents the group to the outside world and faces the opponent of the group. An alpha does not argue, an alpha acts and legitimizes itself out of itself. Alpha has to represent the group effectively and efficiently and thus reduces the threat perception of the other group members. In addition, alpha performs the leadership function. [2] According to Schindler, Alpha has only one obligation, „he must be fatefully connected with the group, he must be “one of us”. If there is doubt about this, fear and insecurity take over the whole group, which sometimes acts out in revolutionary aggression [mutiny]. If it is necessary to consolidate its position, [Alpha] appeals to this fatal connection […].“[3] The beta position is taken by people who have expertise in the area of the group. Beta can advise and guide the group as an expert in the field. In contrast to Alpha, Beta does not legitimize itself out of itself, but must earn its legitimacy through its expertise. His connection to the group is thus indirectly through Alpha. Thus Beta can easily be torn into the possible fall of Alpha. Beta can also be sacrificed by Alpha as a scapegoat for the group’s emotions in case of failure. In return, beta occupies a latent alpha position. The more alpha qualities he needs to accomplish his tasks or how more space beta is granted by alpha, the more clearly beta’s claim to leadership in the group becomes apparent. However, a real beta is not a real alpha in terms of his motivation and his skills as a subject expert, but always strives to be. [4] The gamma position forms the collective of the group, connected in an anonymous membership. As Gamma, one lives in the affectivity of the Alpha and performs the role prescribed by it. One identifies with the Alpha and lives in mutual success. The aggression of the gamma position turns against omega as an enemy image and against the at best rebellious beta position. Alpha is responsible for the formation of the will of the group. Gamma itself has no claim to leadership (anymore) and is satisfied in the prevailing social order of the group. Alpha must, however, also calm these fears, satisfy needs (information, motivation) and limit frustration if he does not want to risk that the masses join the beta position. The roles within the gamma position can be divided into the follower, as a hard-working and loyal follower, the helper, as an active supporter of alpha and, last but not least, the ideologue, who exaggerates formalistically monitors compliance with norms and indirectly sympathizes with beta as a latent alpha position. [5] 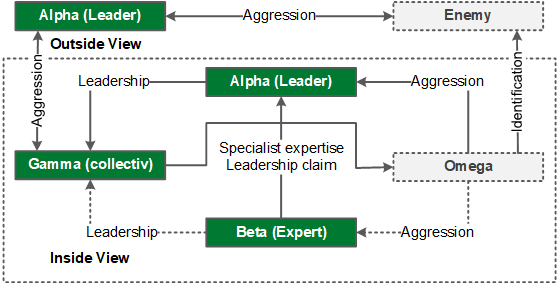 Besides the alpha position, the omega position is in my opinion the most important for group dynamics. Omega represents the enemy in the group, because he is still foreign and without recognition in the group. As a protective mechanism, Omega identifies more and more with the enemy of the group and thus turns against Alpha. As a logical consequence, this leads to punishment by the Gammas. [6]But since the energy of the Gamma position thus turns against Omega and indirectly the enemy, the group is united and loyalty to Alpha is strengthened.

Thanks to the model of rank dynamics in the group, individuals in the group can be assigned to different positions and better understood. Alpha is enabled to motivate the gamma position to cooperate and to strengthen its cohesion through its interventions. In addition, alpha is enabled to better control and manage inherent interests and latent claims to lead beta positions. Alpha rubs against Omega, generating energy for the group itself and for the fight against the enemy.

In this way, the manager achieves a strengthening of cohesion, an improvement in group performance and the preservation of motivation through knowledge generation, also according to the basic principles of rank dynamics.

[1] Cf. Schindler 1957, it is interesting to note that Schindler’s views are based on observations and experiences gained in clinical group therapy on the one hand and in inpatient psychotherapeutic care on the other. Findings that can certainly be helpful in the daily work with working groups of so-called normal people.