One focus of ScripoPapers’ collection is financial scandals and the related (securities-)stories. A beautiful security in this respect is the one of the Capital Growth Company S.A. in Costa Rica. However, the quality of the underlying investments should not be inferred unquestioningly from the valuable feel and the appealing design of the paper, as the following comments will show.

The Capital Growth Fund, the fund of funds and predecessor vehicle of the Company, was founded in the Bahamas in 1962. Shares were offered for sale primarily in Europe through direct sales. The fund of funds invested primarily in the two investment vehicles Capital Growth Fund and Capital Growth Real Estate Fund. New Providence Securities acted as the management company. The fund of funds was placed with private investors and was able to acquire several hundred million euros in Europe. However, the fund’s assets were subject to strong fluctuations in value throughout the period and recently suffered high losses. 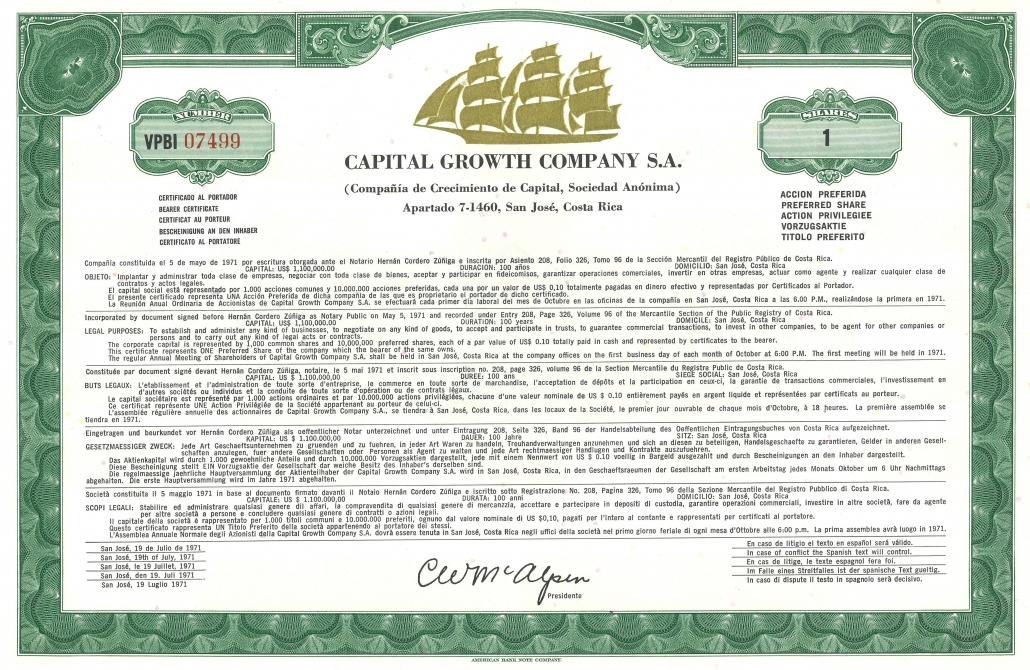 The company withdrew completely from Europe and the capital guarantee by the Phoenix Assurance Company in London lapsed because the corresponding premium payments were not made. The investment overseas ended in a total loss for the private investors.

Pictured is a preference share of Capital Growth Company SA from 1971 with the number VPBI 07499, signed by the then president of the company Clovis W. McAlpin. The golden square rigger (sailing ship with several fully rigged masts) and the green border in guilloche technique as security printing are striking and should be mentioned on the share. In earlier times, guilloches were mainly used as a security feature when printing shares. This was done to make forgery more difficult, as the guilloches on the engraved printing plates could not be easily reproduced. The above preference share is not cancelled and is in very good condition. The coupon sheet is complete, as no dividends were ever paid out by the company.