You are here: Home / General topics / Bounty-Prinzip® in a nutshell

The publication Bounty-Prinzip® for managers (Motivated employees do not mutiny) will be published this fall by Nomos-Verlag. As a small foretaste, we will now reveal something about the structure and content.

A mutiny on a ship is a dramatic event. This leadership crisis in its purest form not only changes the crew, but also the captain as a leader. Probably the most famous mutiny in history, the mutiny on HMS BOUNTY in 1789, has always held a great fascination. However, the distorted image of the commander William Bligh, conveyed by historical novels and audiovisual realizations, in no way reflects the actual historical events.

The mutiny on the BOUNTY is analyzed in the publication on the Bounty-Prinzip® and the alternative facts of the story are reviewed and clarified. To this end, the phenomenon of mutiny is examined from the perspectives of military history, criminal law, labor law, and leadership psychology. In addition, the mutiny on the BOUNTY and the subsequent adventurous voyage of the castaways serve as an object of observation for the analysis of leadership behavior.

Bad leadership is a critical cost factor for every company. Good leadership, on the other hand, increases competitiveness, promotes innovation and strengthens the emotional bond not only among the employees in the team, but also with the company itself. The employees and the manager become a good team!

Mutiny prevention as an intervention is a leadership task. Therefore, it is obvious to want to discuss why mutinies can occur at all, then as now. The Bounty-Prinzip® for managers can thus serve as a lived history or management by historical analogy. The captains on shore do not fall into the same behavioural patterns and the company ship is successfully guided through wind and storm into the safe harbour. 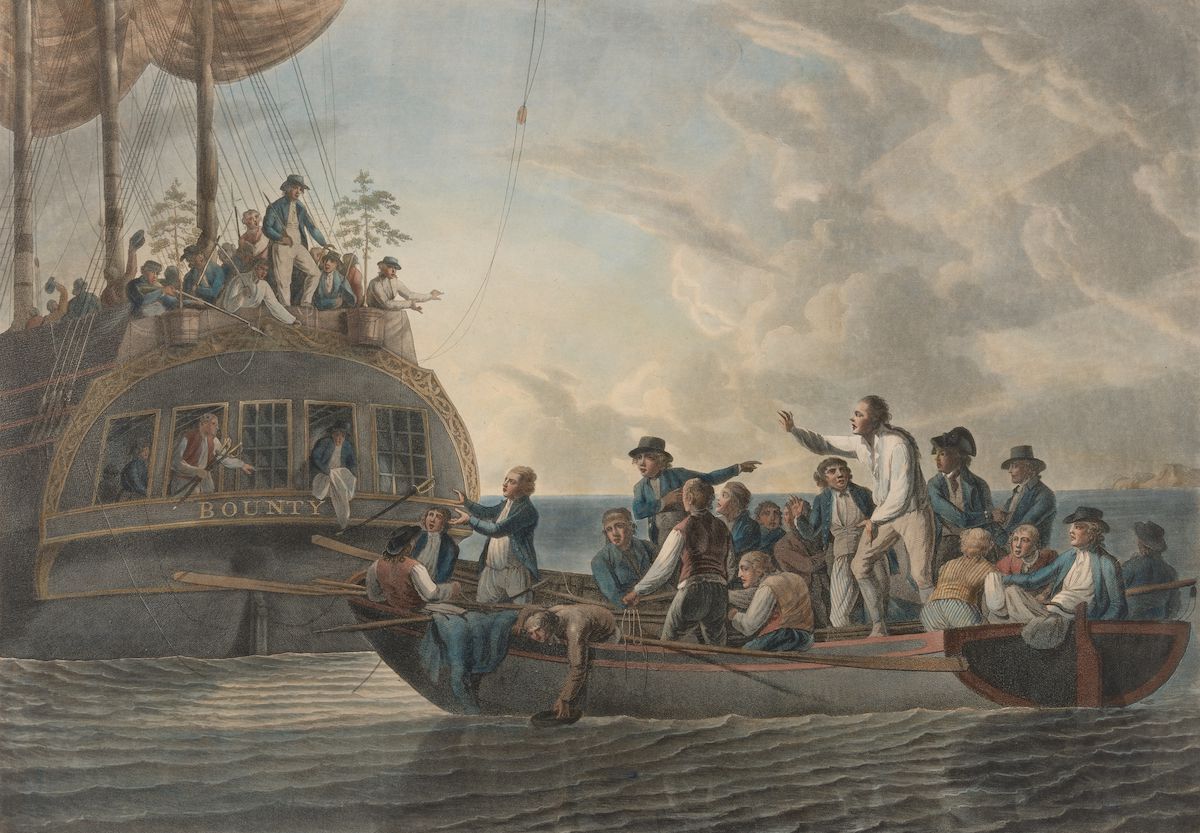 As an example of the extremely one-sided representation of the mutiny on the BOUNTY in the audiovisual realization, the summary of the film version and the trailer from 1935 shall serve. It goes without saying that numerous facts were distorted for the benefit of narrative drama and Bligh was permanently disavowed.

In December 1787, in the British naval port of Portsmouth, the final preparations are being made for the sailing ship BOUNTY to set sail. Shortly before the anchors are lifted, the crew, under the command of Captain Bligh, must witness a macabre ritual: A man sentenced by the naval court is to be flogged on the BOUNTY. Before the sentence is carried out, however, the man is found to be dead. Bligh insists on the execution, saying, “Discipline is everything!” The crew learns what Bligh means by this shortly after the BOUNTY departs. Any laxity, no matter how slight, will be punished with at least two dozen lashes. Due to the harsh and unjust treatment of the crew, the first riots occur, but they are suppressed with a firm hand. First Officer Fletcher Christian takes issue with Bligh several times for his inhumane harshness, but is ultimately threatened with punishment and court martial himself. He repeatedly calms the crew and keeps them from assaulting the captain.

As Bligh changes the BOUNTY’s original course via Cape Horn and chooses the longer sea route via the Cape of Good Hope, the voyage becomes increasingly strenuous. Food becomes scarce and five sailors die of scurvy. Shortly before their arrival in Tahiti, Bligh asks Christian to sign the provision lists he has forged. Christian refuses, knowing that Bligh has been enriching himself on these rations. Bligh judges this to be a disobedience. He gives Christian one last chance by threatening him with court martial in front of a mustered crew and forcing him to sign the lists.

On Tahiti, the crew recovers from the rigors of the voyage. Everyone enjoys a few months in the paradisiacal island world. Many members of the crew fall in love with the attractive Tahitian women, among them Christian and Roger Byam.

After the BOUNTY is loaded with 2000 bread tree plants, Bligh orders the departure. In order to bring the plants to England in usable condition, he plans from the outset to massively cut the drinking water ration of the crew. This sows the seeds of new unrest.

Even on the return voyage, Bligh continues to be merciless against any misconduct. When he orders the sick ship’s doctor on deck for punishment, he dies. The measure is now full. Christian can no longer see the suffering and the much blood on board and gives the signal for mutiny. Bligh and his few faithful are arrested and abandoned in a small boat. Against all odds, Bligh makes it to Timor after a grueling and depriving voyage, from where he takes up the search for the mutineers after his recovery. Meanwhile, Christian has sailed the BOUNTY back to Tahiti. Byam and some others who did not actively participate in the mutiny are also there.

In Tahiti, the mutineers feel safe. They start families and lead a simple but happy life. After more than a year, the British sailing ship PANDORA – led by Captain Bligh – is sighted off Tahiti. Christian and the mutineers with their native women and children board the BOUNTY. Left behind are Byam and several others who believe they will not be charged with mutiny in England. The BOUNTY flees from the English. Eventually, Christian and his friends go ashore on Pitcairn Island. They burn the BOUNTY and take possession of the island. Bligh is blinded by hatred and steers the PANDORA onto a reef during the search. The crew saves themselves in small boats. Back in England, Byam and the other sailors are brought before a naval court-martial for mutiny and sentenced to death. It is not until the sentencing that Byam tells the truth about what happened aboard the BOUNTY. After intercession, the English king pardons those involved in the mutiny. Bligh was never again given command of an English ship.

The 1962 feature film Mutiny on the Bounty, on the other hand, is the first colour adaptation of the well-known mutiny on the HMS Bounty. Like the first film version, this version is also based on the book The Mutiny on the Bounty: Ship Without Harbor by Charles Bernard Nordhoff and James N. Hall. A short excerpt gives a good impression of the fascination of these dramaturgically successful film adaptations, although here too the cinematic fiction deviates greatly from the historical facts.

The last film version of the mutiny to date was filmed in 1984. Bligh was played by 47-year-old Anthony Hopkins and Christian was portrayed by 28-year-old Mel Gibson.

The discussion of the extent to which this portrayal has passed into the general understanding of mutinies as alternative facts forms part of the paper. As in history then, things are not always as they seem at first glance in the modern leadership world today. From this understanding, the key points of the Bounty Principle are derived and leadership principles for strengthening motivation, resilience and trust are developed. Because the principle is: Motivated employees do not mutiny.

Mutiny on the Bounty (The Mutineers turning Lieutenant Bligh and part of the officers and crew adrift from His Majesty’s Ship the Bounty) 1790 by Robert Dodd; National Portrait Gallery, Australia

Sustainability in the financial market