You are here: Home / General topics / Dormitio Abbey in Jersualem

The Dormitio Abbey (basilica and convent buildings) now urgently needs to be renovated, the plaster is flaking and the installations no longer meet today’s requirements. Based on the coalition agreement of 2018 in Germany (CDU, CSU and SPD), it is briefly stated under marginal number 7323ff. that funds are to be made available for the urgently necessary renovation work of Dormitio Abbey. On 03.09.2020 it was now made public that in addition to the already completed renovation of the crypt, the remaining buildings of Dormitio Abbey are now to be renovated by 2022. This is reason enough to take a brief look at the history of Dormitio Abbey and also to dedicate a special Christmas season event to it.

History of the Dormitio Abbey

The Dormitio Abbey is a German-speaking Benedictine abbey on Mount Zion in Jerusalem in the Holy Land. An abbey is a monastery, which is regularly headed by an abbot. A basilica, on the other hand, is an honorary title under canon law. This title is to be given to particularly venerable and significant churches and is awarded directly by the pope. However, today’s Mount Zion is not identical with the biblical Zion. On Mount Zion, in addition to the aforementioned Dormitio Abbey, there is also the Tomb of David, the Catholic cemetery and other historical sites. The spiritual foundation stone of Dormitio Abbey was laid in 1898 by Kaiser Wilhelm II. He bought the land on Zionsberg from Sultan Abdülhamid I and handed it over to the German Association of the Holy Land for further cultivation. The concrete first stone was then laid two years later in October 1900 and after ten years of construction the building was completed. The basilica and the monastery buildings are still owned by the German Association of the Holy Land, which continues to maintain the buildings (maintenance work) and makes the entire complex available to the Benedictines. Since 2011 the Dormitio Abbey has also been home to the Jerusalem Institute of the German Görres Society (JIGG). On behalf of the German Bishops’ Conference (DBK), Dormitio Abbey provides pastoral care for the German-speaking faithful living in Jerusalem or visiting the Holy Land. German-language services are thus held regularly in the Abbey and the monks also act as pastoral care providers. 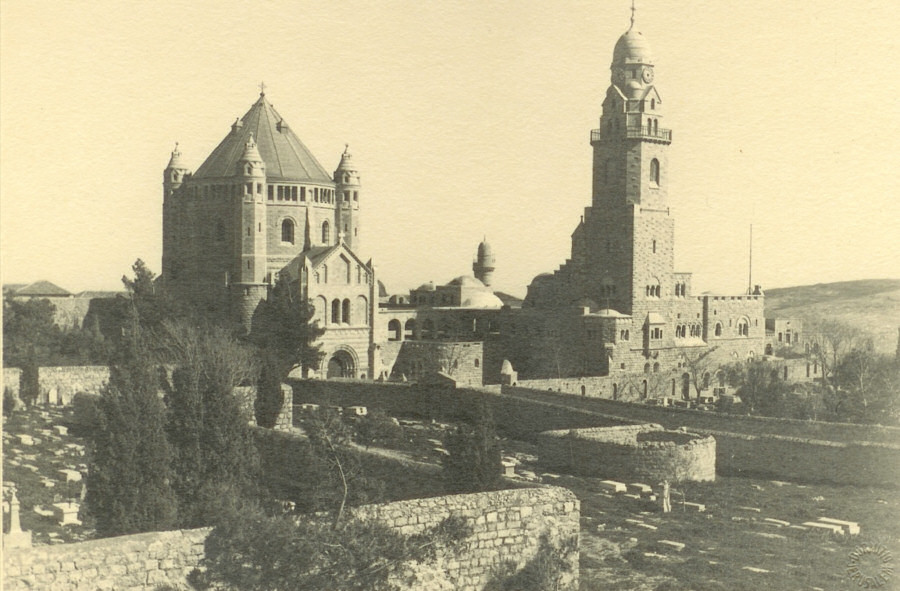 Admission of Mary to heaven (Dormitio)

The Feast of the Assumption of Mary into Heaven is celebrated on August 15th. Colloquially one speaks not of the Latin Dormitio but rather of the Assumption of Mary. Mary, the Mother of God, reaches heaven with body and soul to her Son, without decomposition in the grave as is the case with ordinary mortals. In 1950, Pope Pius XII established the feast of the Assumption of Mary to heaven as a dogma. This almost a century after the proclamation of the dogma of the Immaculate Conception by Pope Pius IX in 1854. The two doctrinal contents belong together system immanently. This, since Mary herself is not only conceived without sin but is also saved from the corruption of the body. The Ascension is thus based on the Immaculate Conception of Mary. Thus Mary is freed from every stain of original sin. Thus, Mary’s conception is not, as often misunderstood, the virgin birth as the conception of Jesus, but rather the procreation of the Mother of God (as the Immaculate) herself.

In addition to the two dogmas on Mary mentioned above, the papal infallibility and the jurisdictional primacy of the pope in 1870 were recorded in the Catholic Church in the form of a dogma. The Second Vatican Council (1962-1965) then continued to record the dogmas as lasting truths, but in the sense of a hierarchy of truths not all dogmas should be given equal weight.

Pope Francis made a pilgrimage to the Holy Land in 2014. A few hours after he celebrated Holy Mass on Mount Zion on 26 May 2014, a fire broke out in the Dormitio Basilica, more precisely in the crypt. Arson was quickly suspected. The Benedictine monks, thanks to the attention and with the support of a visitor, were able to bring the fire under control on their own. A fire in the Dormitio Basilica would probably have affected the entire Zion Hill.

In the run-up to the Pope’s visit, Jewish activists had protested against the Papal service in the Upper Room. This is located above the tomb believed to be attributed to King David (so-called David’s Tomb). There is a persistent rumour among Jewish activists that the Catholic Church wants to take back control of these premises. The Upper Room, located on Mount Zion, had been under the care of the Franciscan Custody of the Holy Land for 200 years, but was expropriated by Suleyman the Magnificent in the 16th century and only came under Israeli control after the establishment of the State of Israel in 1948.

It was only five years after the arson attack that there was any movement on the matter. The Jerusalem District Court dropped charges against two young men in 2019 for lack of evidence. They were suspected of perpetrating the arson attack on the abbey in May 2014. However, according to reports, the confessions of the suspects were not admitted because the interrogation by the domestic intelligence agency Shin Beit had taken place under intense pressure. The suspects were also denied access to a lawyer. A lawyer for the men welcomed the decision and even accused the investigating authorities of torture. According to reports, one of the two men is a 23-year-old Jewish settler who had already been sentenced to four years in prison in 2017 for arson at the German Benedictine monastery of Tabgha on the Sea of Galilee. The fire in June 2015 largely destroyed the south wing of the church’s atrium next to the monastery, which was only completed in 2012.

Christmas from Jerusalem to Bethlehem

After the midnight service on December 25th in the Basilica of Dormitio, the monks set off on foot for Bethlehem, collecting the names (and indirectly the concerns of the faithful) in advance, which are then printed on a scroll on the way to Bethlehem. The name of a person already has a great significance in the Bible.

Fear not, for I have redeemed you, I have called you by name, you belong to me.

A beautiful tradition and also in the year 2020 the names of the author’s family members, among others, have made their way to Bethlehem, the Church of the Nativity of Jesus.

Catholic Finance in a nutshell
Scroll to top