You are here: Home / General topics / Smart Contracts in the nutshell

In the following text an overview of the interaction of blockchain and Bitcoin and the further development to Etherium shall be shown. The Smart Contracts are explained, these are neither smart nor actually contracts. Rather, they are a kind of macro of processes or predefined criteria.

A Smart Contract is a software that contains legally relevant actions (in particular an actual exchange of services) depending on digitally testable events are controlled, monitored and/or documented, with whose help may, however, under certain circumstances, also include in rem and/or contracts under the law of obligations can be concluded.

The Italian philosopher Maurizio Ferraris describes the decentralized block chain system with the so-called notch wood. This is a medieval counting list used to document the debt relations existing between two parties in a forgery-proof manner. A stick was marked with symbols. The cane was then divided lengthwise so that debtors and creditors could find the matching engravings on their half of the cane at the point of separation. None of the parties could make changes to these markings without it being obvious when reassembling. This is also the core of today’s block chain technology with the decentralized security system. The only new thing is that it is a notched log distributed worldwide to countless computers. This is because, unlike the notched bar, you have a data track “that is stored on as many hard disks as possible to prevent the addition or deletion of tracks (blocks). Once again, the technology brings ancient things to light, as in a procession. The block chain may help us to solve many problems – but we can assume that it also creates many new problems. “ [1]

Basics of the Blockchain

The block chain technology is based on the construction of the so-called distributed ledger technologies. This describes a technique for distributed data storage in a peer-to-peer network (P2P network). The network nodes decide jointly by agreement (consensus) on the updating of the data. This data can be account balances of a crypto currency, hash values of an electronic file, or the contractual status of so-called smart contracts. All individual data are chronologically sorted, validated and combined into blocks as so-called transactions in the network. The hash value of a preceding block forms the header of the following block. The blocks are thus connected to their predecessor block in a tamper-proof manner by means of cryptographic concatenation. The result is a constantly growing chain of data blocks, the so-called block chain as a special case of a distributed ledger. 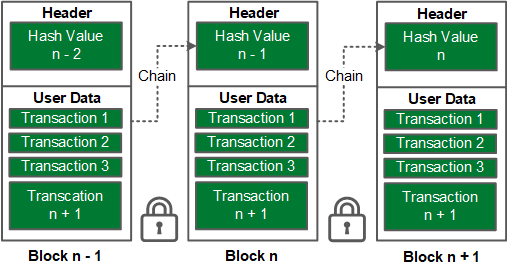 The beginnings of the Bitcoin

In the 2008 white paper by Sathosi Nakamoto, Bitcoin’s system is described as follows, the similarities to medieval tally books are obvious: “A pure peer-to-peer version of an electronic payment procedure would allow online payments to be sent directly from one party to another without going through a financial institution. Digital signatures are part of the solution, but the main benefits are lost if a trusted third party is still needed to prevent double spending. We propose a solution to the double spending problem by using a peer-to-peer network. The network timestamps transactions by hashing them into a continuous chain of hash-based proof-of-work, creating a record that cannot be altered without re-creating the proof-of-work. The longest chain not only serves as proof of the sequence of witnessed events, but also as proof that it comes from the largest pool of CPU power. As long as most CPU power is controlled by nodes that do not cooperate to attack the network, they will generate the longest chain and be faster than the attackers. The network itself requires only a minimal structure. Messages are transmitted on a best-effort basis and the nodes can leave and re-enter the network at will, accepting the longest proof-of-work chain as proof of what happened while they were away”. [2]

Blockchain and Bitcoin are historically closely related, but do not necessarily form a tightly connected unit. A block chain is a list of data records (so-called blocks), which are chained together by means of an encrypted procedure. Each of these blocks contains a cryptographically secured hash (scatter value) of the preceding block, a timestamp and the respective transaction data. The block chain is often referred to as a decentralized accounting system (so-called Distributed-Ledger-Technology, DLT). In this sense, each accounting record is based on all the previous accounting records. The accounting journal, as the sum of all individual entries, cannot therefore be changed without affecting all subsequent entries and is therefore considered tamper-proof. This system of decentralized verification and storage points represents a paradigm shift in transaction security. A very well-known use case is the crypto currency Bitcoin. The Ethereum network with the transaction unit Ether is to be distinguished from it. Ethereum is more than a crypto currency and represents a platform for the development of decentralized apps (so-called Smart Contracts). Ether is therefore not exclusively used as a crypto currency, but can also be used for the processing of one- or two-sided contracts or for the representation of factual and legal relationships. The Smart Contracts are the basis of many DApps (decentralized applications).

A smart contract is an executable program whose code is sent to the block chain in a transaction and executed by the network nodes during validation. Smart Contracts are called (or started) and relevant input is usually also entered via transactions. The immutability of the block chain prevents subsequent changes to the program code, and the automatic validation process prevents the execution of the contract from being prevented. Smart Contracts are not contracts, but “computer-aided transaction logs that execute contract provisions.“[3]